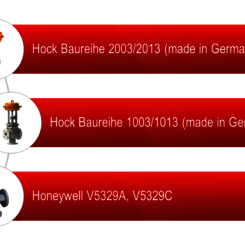 Thus the valve body is manufactured of ductile cast iron and resists a nominal pressure of up to PN 25. Both seat rings and plugs are made of stainless steel and can be exchanged separately. As standard for all kind of A. Hock valves you can purchase all components individually as spare parts.

The mixing version can be rebuild to a diverting (and vice versa) without the need of additional components.

The A. Hock three-way valve series 1003 / 1013 has the same installation lengths as the following valve series:

The three-way valve series 1003 / 1013 is equipped with interfaces to all actuators of our portfolio as standard.

These include our pneumatic actuator S2000, our electric valve actuator E2000 as well as the Honeywell actuators MP953 and ML642/ML742. When you consider using electric actuators and a medium temperature higher than 150 °C we offer a special high temperature version of our control valve series 1003/1013.