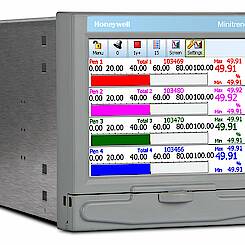 • Improved data storage and higher capacities with the use of SD (Secure Digital) cards.

• Improved Batch start up with a single data entry screen

• The ability to save the recorded data in a CSV (Comma Separated Variable) type data format, providing the user with an alternative means of saving the data.

• New standard screen types give the user a wider selection of available screen formats with an increase screen selection capacity.

A new version of Trendmanager Suite is available too.

A new release of the TrendManager / TrendServer software that supports the new GR recorder functions is also available. This update includes the following features:

• The Comm Server with the ability to run as a Service rather than just as an application.

• TrendViewer improvements so the last graph does not have to be re-imported each time the user wants to view it.

• New Archived database provides better level of safety that data cannot get deleted, allows database to be viewed from a backed up database by users

• Automated installation of DCOM Settings for easier set up.

• Pen identifiers improved, an Export progress bar has been added, no extra CSV data outside of the selected data range for an export

A new version of the Screen Designer software is also available to support new screen designs for the higher resolution displays used in the Minitrend and Multitrend GR recorders. The new Screen Designer sup